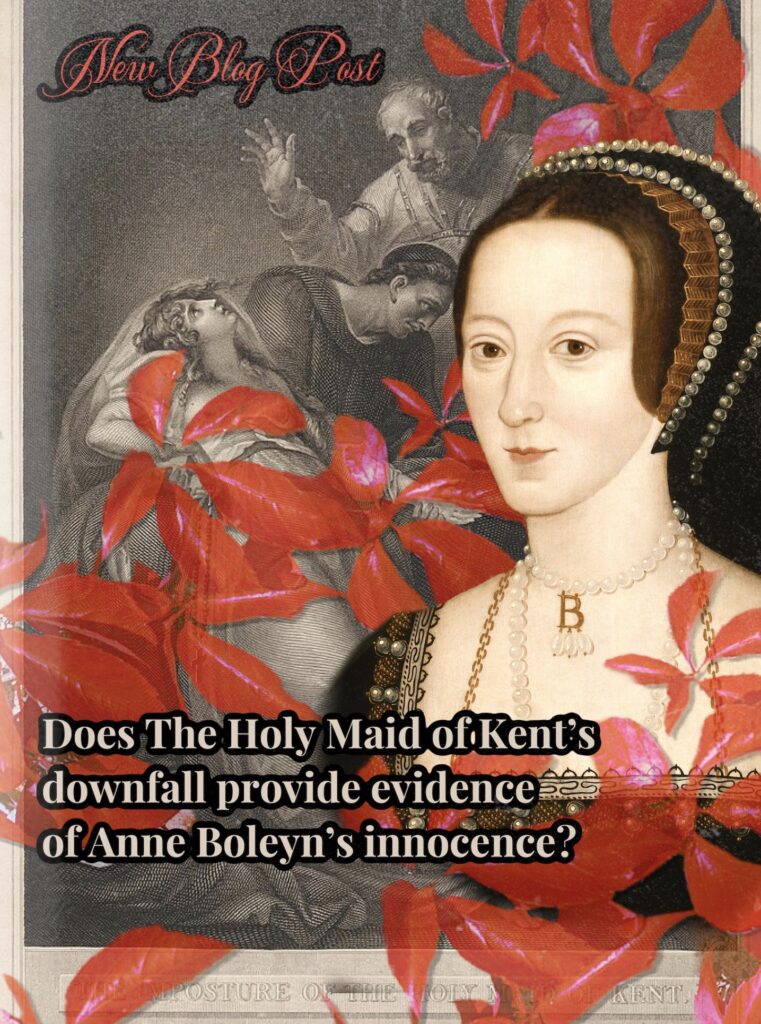 Have you heard this story before? The one where a woman captures the attention of King Henry VIII and finds herself raised high into a life she never expected. Turning more than a few heads, she continues to rise until she is put down on the king’s orders. Arrested, she is publicly humiliated and has her name and reputation stained. She is no longer pure and virtuous, but branded as treasonous, wicked and immoral. She is found guilty of treason against the King and condemned to die. Not only is she executed, but her convicted male conspirators are killed alongside her. The woman is Elizabeth Barton and her story is based in history not fiction.

Did you think ‘the woman’ was Anne Boleyn? Their stories have remarkably similar overtones which is why I believe Elizabeth’s story, or The Holy Maid of Kent or The Nun of Kent as she was also called, provides evidence that Anne Boleyn was innocent of, at the very least, the charges of adultery and incest.

Who was Elizabeth Barton?

Elizabeth Barton rose from her humble life as a rural servant to become a renowned Catholic prophetess. Falling ill before she was 20 years old, Elizabeth began to go into trances and predict the future. In the 16th century, these prophetic episodes were believed to be either divine or evil in origin. (1) Thankfully for Elizabeth, though not fully knowledgeable about religious matters, she is said to have spoken about the 10 commandments and other Biblical teachings which convinced the men who were examining her that her messages were from a holy source. (2) Some powerful people, like Cardinal Thomas Wolsey, came to believe her visions were true and devout.

Henry wasn’t too bothered with Elizabeth as her prophecies were inline with the status quo of his reign. Until they weren’t. Then he was triggered.

Elizabeth was openly against Henry annulling his marriage to Katherine of Aragon to marry Anne Boleyn. She is said to have conveyed the message to Henry in person that “if he divorced his wife, he should not ‘reign a month, but should die a villain’s death.'”(3) Amazingly, Henry let her go after saying this. When her followers grew and she continued speaking against him, Henry had had enough and put a stop to her actions. It would look very taboo to execute someone with literally a holier than thou presence. Her reputation needed to be mucked about first.

I find it interesting that Thomas Cranmer writes in a letter to Archdeacon Hawkyns about Elizabeth that, “from me she was had to Master Cromewell, to be further examined there. And now she hath confessed all.” (4) Oh that Cromwell! He’s really great at getting people to confess isn’t he? I wonder if Mark Smeaton and Elizabeth Barton shared similar experiences of his hospitality? Mark Smeaton was the only man not of the nobility class to be accused of adultery with Anne Boleyn (and so could be legally tortured). He, like Elizabeth, confessed after his visit with Cromwell too.

There is a letter written by Spanish Ambassador Eustace Chapuys that states, “Many think, and even believe, that those who now have the Nun in their power will make her accuse many people unjustly, that they may thus have the occasion and the means of revenging themselves upon those who have supported the Queen and take from them large sums of money by way of a fine, which is the thing in this world the King likes the most.” (5) I find that statement very telling of the relationship between Henry and Cromwell. Chapuys was worried about Queen Katherine of Aragon during the takedown of Elizabeth as Henry was desperate to be rid of her to marry Anne Boleyn.

Chapuys continues saying, “The Nun has almost always been under the keeping of Cromwell or of his people, who have continually treated her as a high-born lady (comme une grosse dame); which fact in a great measure confirms my apprehensions as above.” (6) Cromwell, however, declared there to be no evidence against Queen Katherine. (7)

Regardless of what happened behind closed doors to extract a confession, Elizabeth and some of her male associates, were publicly shamed at a sermon at St.Paul’s Cross on November 23, 1533.(8) The sermon preached by John Capon set out not only to discredit and shame Elizabeth, but to validate Henry’s marital choices.(9) Elizabeth was forced into a pillory and to admit she was a fraud while the sermons strongly insinuated that she was also guilty of acting on her carnal desires.(10)

The similarities of two downfalls

Similarities in the downfalls of Elizabeth Barton and Anne Boleyn are:

Why do the similarities in their downfalls help suggest Anne’s innocence? Well, it suggests a pattern or at least using knowledge of what works, and repeating it. I believe the women’s reputations were purposely discredited largely by Thomas Cromwell, in an attempt to reduce public sympathy for their falls and help secure their ends. It seems reminiscent of the outdated and nasty attitude of “she asked for it”. Whether true or not, sexual impurity could quickly rouse a crowd from pity to disgust and even fear.

The Tudor mindset of carnal vices

The Tudor mindset of how carnal misconduct was viewed is important. Thomas Becon in 1560 writes how a sexually immoral woman was the responsibility of an entire community because of the belief that God could punish them all for the sins of one. (11) Women who committed (or were convicted of) adulterous affairs outside of the Church’s moral code, were often publicly shamed and sometimes made to kneel each Sunday in their linen undergarments at their local Church for a period of time.(12) Elizabeth Barton was humiliated in a Church setting, signalling to the Tudor public that she was guilty of sexual vices. Unfortunately for her, St. Paul’s Cross would have welcomed about 6,000 people to witness her shame and the ordeal would be repeated again in Canterbury on December 7, 1533.(13)

Not much needed to be noted to discredit Elizabeth. It was stated that she arrived to speak to her spiritual teacher one night and was seen leaving in the morning. (14) I can almost hear a communal intake of breath from the shock and horror of it all. That is not sarcasm. In the 21st century, that is quite tame behaviour to many of us, but for an unmarried Tudor woman it was really terrible. For an unmarried, holy woman it was next-level scandal. Perfect fodder for Henry VIII to be able to look less dastardly executing the Holy Maid of Kent. Later renamed the Mad Maid of Kent. Coincidence? I doubt it.

Elizabeth was executed at Tyburn with her close supporters (sources seem to differ on how many, ranging from five to nine) on April 20, 1534. Though Elizabeth was hanged, afterward her head was removed and displayed on a pike. She remains the only woman to have had the dishonour of having her head displayed on London Bridge. (15)

While Anne Boleyn was thankfully not subjected to this horrific practice, she was still beheaded in 1536 and buried without the proper honours befitting a Queen. Five men, including Anne’s brother George, were executed two days beforehand. All condemned, except Mark Smeaton, never confessed to committing adultery.

How did Henry get away with ordering the executions of a popular religious prophetess and his (now generally assumed innocent) wife? By reducing the public outcry of pity.

I believe Anne’s name was purposely stained by Thomas Cromwell in 1536 with words like adultery and incest in an attempt to discredit her reputation, in a similar method as had been done to Elizabeth Barton in 1533. George Boleyn, Anne’s brother and also quite popular at court, was accused of committing incest with his sister. This slander seems to reek of the old saying, “kill two birds with one stone”.

Elizabeth’s main offense was opposing Henry. The sexual indiscretions were more of a “by the way she’s this kind of person so don’t make her a martyr” statement. Anne was convicted of plotting to kill the King, but I find many people remember the adulterous and incestuous claims against her most. They are shocking claims and if we still find them so in the 21st century, the 16th must have felt like their minds had been blown. I feel like the intensity of the charges were considered necessary for a few reasons.

Motivation for the intensity of Anne Boleyn’s carnal charges:

These reasons also align well with the motivation of tarnishing Elizabeth’s reputation.

Two powerful women were brought down on treason charges and both had their reputations stained with having committed sexual vices. The motivation is clear. Ruin a woman’s reputation, and the charges against her are more believable and the king becomes a victim not a monster. It would be an added bonus if the crowd, so roused by the charges, called for the death of the victim.

Could the accusations have been true?

There’s always a chance for anything, but it’s not likely. There had been rumours from France circulating to England about Anne having affairs with courtiers, but they were likely just that. (16) Cromwell would have heard these and was in the perfect position to turn the smoke into a fire, and convince Henry to act quickly. I believe that is exactly what he did.

A huge portion of the adultery charges against Anne have been shown by historians to be inaccurate. The dates and places given just don’t add up. Besides, both women were pious and would have feared for their souls.

Why does the comparison between cases provide evidence that Anne was innocent at least of the adultery and incest charges?

Well, because the process was done to Elizabeth and Henry kept his crown and came out on top. It was a method that was tried and tested. Why not reuse it to bring down a Queen?

Under the guidance of his mentor Cardinal Wolsey, Cromwell dissolved several monasteries, reminiscent of a practice run before the big take down years later.(17) This shows Cromwell utilized his knowledge from previous projects to satisfy the changing commands of Henry. Besides, Cromwell was a busy man. Why reinvent the wheel if it turns just fine?

Cromwell was a key player in the downfall of Elizabeth Barton, and a few years later, he used his experience to orchestrate the fall of Anne Boleyn. I believe there is a correlation between both cases and that the carnal vice accusations hurled at both women were fabricated to reduce public outcry and sympathy while attempting to foster support for King Henry VIII. So, yes, I think the downfall of The Holy Maid of Kent gives us evidence that Anne Boleyn was innocent, at the very least, of the charges of adultery and incest compiled against her by Thomas Cromwell.

What do you think? Let me know in the comments over on Instagram.

Goodman, Ruth. How to Be a Tudor: A Dawn-to-Dusk Guide to Everyday Life. Great Britain: Penguin Books, 2016.

Under These Restless Skies blog. “Elizabeth Barton, The Nun of Kent.” Accessed May 2022. http://under-these-restless-skies.blogspot.com/2014/03/elizabeth-barton-nun-of-kent.html?m=1