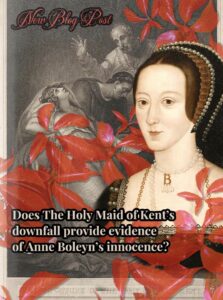 Have you heard this story before? The one where a woman captures the attention of King Henry VIII and finds herself raised high into a life she never expected. Turning more than a few heads, she continues to rise until she is put down on the king’s orders. Arrested, she is publicly humiliated and has her name and reputation stained. She is no longer pure and virtuous, but branded as treasonous, wicked and immoral. She is found guilty of treason against the King and condemned to die. Not only is she executed, but her convicted male conspirators are killed alongside her. The woman is Elizabeth Barton and her story is based in history not fiction.

Did you think ‘the woman’ was Anne Boleyn? Their stories have remarkably similar overtones which is why I believe Elizabeth’s story, or The Holy Maid of Kent or The Nun of Kent as she was also called, provides evidence that Anne Boleyn was innocent of, at the very least, the charges of adultery and incest.

To continue reading and learn my reasoning, please click here.